After deciding to give biodiesel a try, I had to get a diesel car. It’s not the easiest task in the world to find a good diesel in San Francisco. Because of current regulations, you can’t buy a new diesel in California. So cars like the Jeep Liberty CRD, or the various new diesel Volkswagen’s are out unless you can find a used one – check diesels on Craigslist to see what’s available, they tend to run in the $15-30k range. If you want to spend less (like I did), you can find used Mercedes diesels (check Craigslist again or eBay). There are lots of well preserved 80s models in the $5-10k range. All of the above will work with biodiesel with either no or minimal conversion (replacement of fuel lines might be required on older models). Finally, there are also some diesel pickups and SUVs that show up in those listings. I dismissed those because they are on the large/inconvenient side for San Francisco.

In my quest to find a good diesel, I did test drive a couple of early 80s Mercedes. They were pretty clunky and not very fun to drive. So I ended up passing on the above options and ventured into more exotic choices… I decided to try and find a used diesel Land Rover or Land Cruiser. I started with Land Cruisers because I read that there are plenty of them in Canada and you can find importers who will bring them into California (they were never sold directly in the US). I searched the Land Cruiser forums and found several guys who offer to import diesel Land Cruisers. I also started watching Craigslist Vancouver for used ones. In particular, I wanted a mid 80s BJ or HJ60. Here’s what I found: there are decent looking used diesel BJ/HJ60s in the $5-10k range in Canada. However, none of the 4 or 5 importers I contacted ended up following through. I also found a few people with import horror stories (any car newer than 25 years gets imported as a grey market vehicle which apparently can cause all kinds of issues with the DMV or trying to find mechanics to work on them). If you are looking for older BJ4x style Land Cruisers, US based ones do pop up on eBay and I found some dealers who specialize in them.

Given my slow progress with Land Cruisers, I then checked into Land Rovers and finally found what I was looking for. I started by checking a couple of sites for US based used land rover dealers and eBay again. I ended up finding two places in the UK that specialize in sending old Land Rovers to the US, Land Rover Centre has more original and slightly pricier models ($10-15k range), and UK Landrovers who have more affordable, daily driver type cars ($5-10k range). UK Landrovers sell most of their cars via eBay. They always have a few diesels sitting around, so selection is OK. The drawbacks are buying a car without seeing it and that most of them are right hand drive.

I ended up finding a nice looking 73 short wheel base Land Rover at UK Landrovers (via a Land Rover enthusiast/importer in Oregon): 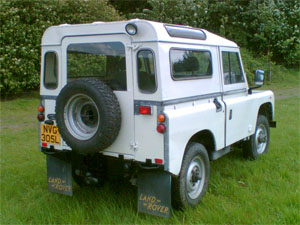 It has an updated diesel engine, ready for biodiesel. It was reasonably priced and it’s on its way from the UK at the moment. I’m picking it up in a couple of weeks and will report back on how the importing went and what the car is like in person.

Well, I have to drive a minivan (son uses wheelchair) and there are no environmentally frienly minivans. I have looked at the dodge sprinters but all I need is a MINI van so that would be overkill. I have a Mazda MPV (best minivan gasmileage) but feel that this is not much of a compromise. Europe is full of Diesel VW vans. How can I import one???

That's going to be tough. I've seen a couple of 80s diesel Vanagons for sale online, but they are usually pretty old. The newer VW vans I believe are impossible to import because they were never sold in the US and they are newer than 25 years (the limit for importing cars without requiring officially approved engines and smog checks).

Beware of the diesel Vanagons, though. I was looking into them for biodiesel conversion and the two years that they were offered as diesel (either '81/'82 or '82/'83, I forget whch), were lemons. Very underpowered and VW tinkerers stay away from them. I get this info from the Go Westy people.

Please let us know when the Land Rover arrives.

[…] In my last installment I described how I had found a diesel Land Rover from an outfit called UK LandRovers in, you guessed it, the UK. They shipped the car in early July and it arrived in Port Hueneme, just south of Santa Barbara about 5 weeks later. The UK LandRovers guys sent me all the necessary paperwork and I called the port people who recommended Soo Hoo Customs Broker to get the car through customs. The Soo Hoo people were super friendly and efficient and 10 days and $400 ($200 to Soo Hoo and $200 for import taxes) later, I got a call that my car was ready for pickup. I checked with the DMV and they said to just drive it home from the port and then bring it to the DMV to get plates (sounded surprisingly relaxed for a DMV). […]

Do you suggest any particular diesel Land Rovers for Biodiesel conversion?

How/Where do you plan to get the biodiesel from? Homekit? Pumps near you?

I have always wanted to convert a classic LR to biodiesel.

Ken – all my research so far is summarized at https://toni.wordpress.com/biodiesel-info/. I use the pump at the SF Biofuels coop (http://sfbiofuels.org/). They are great. Any Land Rover diesel will work, they are just so hard to find.

I was also looking for a larger diesel vehicle. What William said is true of the older diesel Vanagons. The Green Car Company has an innovative service though. They buy an older Vanagon and restore it. Then they import a modern 1.9L turbodiesel from Europe with less than 50k miles on it and convert the Vanagon. So you get excellent power, 30-35 mpg, and they are bio-diesel ready. http://www.diamondlot.com/greencarco/green/ I have not visited them to look at their vehicles in person, but if anyone does, a review would be appreciated…

I am selling a diesel land cruiser that i run on bio99 in the summer and a blend in the winter. its in awesome shape 200,000 miles 1983 great inside and out (has the typical rust but all cruisers do) heat, electric, defrost all still in great working order, new stereo, 5 speed manual, 4 wheel drive, hitch, winch, please e-mail me if you are interested leftfeet3@gmail.com posted July 2007

i build custom land rovers for the usa market, from england right now but looking at moving the operation to california. most of what i do is diesel though can also do propane cars too.

any land rover will run on biodiesel yes, but some run ok on veggie oil others not so well……… email me at duncangrows@hotmail.com if you want more info on what i do :O)

Hi. I would also like to switch to biodiesel. I drive in the snow often and would like 4WD and room for stuff (I move a lot). I would like to spend about 7k. I live in Oregon and have tried to contact a couple of guys who might import but they never get back to me. Who did you go through to get your rover? Also, the amount of information is extremely overwhelming. Do you have any recommendations on what I should look for (specific model and year)?

HUGE thank yous for any help!

The only 4WD diesel for that kind of budget I can think of is a used Suburban. Here are ones for sale on Craigslist near Portland:

For a little bit more, you can probably find a Jeep Liberty diesel: