Tomorrow marks the start of another WordCamp San Francisco. It’s the 9th one, if I counted correctly. The look of the WordCamp site has changed a bit over time: 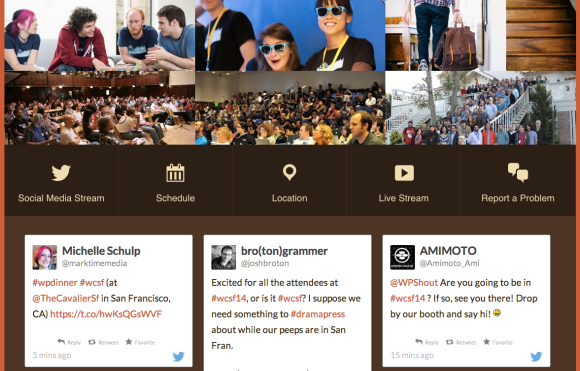 But amazingly, most other things have stayed the same. The first WordCamp was somewhat spur of the moment. It was in early July 2006 when we announced the idea for a WordPress user conference to be held 4 weeks later on August 5th at the Swedish American Hall in San Francisco (we actually just announced the date, the venue hadn’t been fully figured out yet – kind of amazing to think about now that we have to reserve venues a year in advance). Given the short notice and the newness of the idea, we didn’t know how many people to expect. So we were thrilled when over 500 people signed up, and then quickly got worried as we started scrambling to pull everything together. Our nascent “event skills” were put to the test, and despite a couple of hiccups – our badges were kind of a disaster and we had enough bottled water for a few thousand people – we ended up with an amazing first event with great speakers and energy. Our initial goals were to bring together the WordPress community, have the conference be very affordable (unlike most tech conferences), have speakers from within the WordPress community (instead of famous tech pundits), and serve a real BBQ lunch (from Memphis Minnies). WordCamp SF is now three or four times bigger and the venue is nicer, but the basic ideas and values are still in place and have helped inspire WordCamps all over the world.

6 replies on “WordCamp over the years”

[…] Schneider WordCamp over the years A great cause, especially now Podcasts I like Diane’s portfolio A trip for the […]

[…] Schneider WordCamp over the years A great cause, especially now Podcasts I like Diane’s portfolio A trip for the […]