It’s taken me a while, but I have finally made my transition to biodiesel! In the last installment I talked about picking up my diesel Land Rover in Port Hueneme and then getting it ready for the road. Well, something came up while it was in the shop getting fixed up. I had originally been looking for a diesel Landcruiser as my biodiesel project car. After months of trying, I gave up and went for the Land Rover instead. Then while the Land Rover was in the shop, I found a great 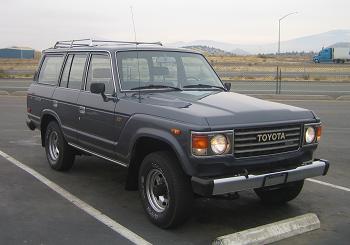 Landcruiser – so now I have 2 biodiesel cars! I found the Landcruiser on eBay. It was listed by Chevrolake Motors in Canada, a car importer/exporter whose name I’d seen listed in the Landcruiser web forums as a reliable Landcruiser importer. I called them up and the car sounded promising, lots of miles (260,000!), but a straight, well maintained car with very little rust. So I headed up to Seattle to meet with Wayne Darby from Chevrolake. He picked me up at the airport and I liked the car immediately (Wayne too 🙂 ). I bought it on the spot and drove it back to San Francisco (Wayne was nice enough to let me borrow his dealer plates for the trip). Except for a loud muffler, the 14 hour drive was fine. I listened to The Golden Compass (9 hours, highly recommended),

stopped for the night at a friend’s house in Ashland (thank you Cathy and Keith for a great evening!), checked out the Calatrava sundial bridge in Redding on the way, and otherwise just cruised along. Once in San Francisco, I got California plates for the car. This was an incredibly easy 20 minute exercise at the DMV thanks to the fact that Chevrolake had gotten the car titled in Indiana before bringing it in from Canada (I insisted on them doing the title because I’d read Landcruiser importing horror stories). I then followed Zander’s excellent fuel hose replacement directions and I’m now happily sipping biodiesel (looks like I’m getting about 25 miles per gallon, pretty good for a tank-like SUV) which I get at the Biofuel Coop South of Market in San Francisco (please note their excellent WordPress powered site!).

Given my picky choice of vehicle it took me 10 months to get going since Braughm first gave me the idea (I probably could have done it in a couple of weeks with a diesel Jetta!). What’s funny is that my car looks almost identical to the one I showed a picture of in that orignal post.

But what happened to the Land Rover? When it rains it pours! It works great as well. I got it back from the shop in September and it now runs great. It’s a lot of fun to drive, my kids are in love with it (as are all the neighborhood kids). The rear sidefacing bench seats, and the overall rugged safari feel are perfect. After I got it to San Francisco, I took it to the DMV to get it titled. Just like the Toyota, it was easy as pie to get the California plates. They did a 5 minute inspection (completely missing the fact that it was a diesel) and another 10 minutes later I had my plates. I’ve been driving it around San Francisco a little and enjoying it, but the Landcruiser is more practical. So I’m planning on keeping the Cruiser and selling the Land Rover.

My posts on biodiesel are getting a suprising amount of search engine traffic, so I’ve created a page with biodiesel info based on I’ve learned in this process.

I'm interested in buying your Land Rover. Can you please respond with details of the vehicle and/ or a number to contact you. I live in Napa so can easily pop down to look at the vehicle.

I have really enjoyed reading your biodiesel tale as biodiesel is completely new to me. It seems to be a fantastic way to make a smaller impact with these great vehicles.

it's not just the young neighborhood kids who are in love with tony's land rover… i live just around the corner from him and have caught a few precious glimpses of it. it's a beauty.

Toni – I've thought about doing this a few times, but its decidedly harder in NYC. Do you rely on SF BioDiesel Co-Op exclusively? Would you have done this if you had to do more of the veggie oil processing yourself?

> Do you rely on SF BioDiesel Co-Op exclusively?

So far yes. I've seen announcements of additional biodiesel pumps to open in San Francisco, but so far the only reliable supply I've found is the co-op.

> Would you have done this if you had to do more of the veggie oil processing yourself?

[…] Part IV is here, or check out this summary page with biodiesel […]

Have you sold the Rover? I went to the UK site you mentioned and have to give you credit for picking such a great car.

You have done what I have been dreaming to do. Purchase a diesel SUV and import it.

Do they have to be over 25 years old to get the ease of import that you did?

For example, could I import a late model Rover?

Thanks for your response. It's hell getting a diesel SUV here in CA!

Excellent site, a friend referred me to your page and I'm glad I was able to find it.

I was wondering if you could elaborate on your experience with the CA DMV when you registered the UK Rover. I am in the process of purchasing an '82 Landcruiser (over 25 years) which has already cleared customs and is registered in Georgia. I've read extensively online, but much of the online info relates to Canadian versions. Since your UK Rover was likely imported similarly to the soon-to-be mine Aussie LC, I am wondering if you could let me know the process you went through and any snags for which I should be ready. Feel free to email me if you like.

wow, i love the subject.

Enjoyed reading your story, just seeing if you still want to sell the Landy, im an ex Pat from England and looking for a bit of home, let me know if your interested to sell it.

Toni: Nice website. I will assume the Rover is sold but, if not, please contact me as this is exactly what I am in the midst of (trying to) import from the UK. I have probably read too much of the regulatory blurb, but feel like I am walking through a minefield. Any encouraging words appreciated. I too want to run my truck on either biodiesel or WVO. Any advise re the latter? Thanks.SWA