I am now the proud owner of a biodiesel gas pump in my garage: Two 55 gallon barrels of biodiesel with a handcrank that allows me to fill up my Landcruiser right in my driveway.

This came about because the SFBiofuels coop’s biodiesel pump got shut down (due to neighbors complaining), which has made getting biodiesel in San Francisco somewhat of a pain. The coop apparently has plans/permits in the works for 4 potential new locations around San Francisco, but in the meantime I decided to take matters in my own hands. I called up Peoples Fuel, they gave me a quote for a biodiesel home setup (about $400), came out to my house to install it, and filled up the barrels right from their biodiesel delivery truck. They’ll come back for refills anytime I run out. Peoples Fuel have been great to deal with. Apparently they deliver/quality monitor biodiesel for lots of places around town, including the SF Zoo (I believe they run 100% biodiesel) and the SF city buses (they’ve just switched their entire fleet to B20, 20% biodiesel).

PS: Before Diane let me put a gas station in our house, she asked me to look into the safety issues. I’m happy to report that biodiesel has a flash point of over 200 degrees Celsius (I think that means that the garage will burn down before the biodiesel will ignite). It’s also been shown to be 10x less dangerous than table salt when ingested – I’ve no plans to try this, but apparently it’s safe to swallow.

Not that this car will ever make it to the US, but take a look: 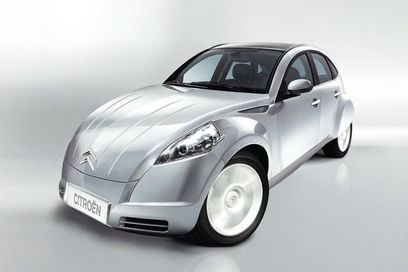 Apparently Citroen will release a successor to the classic 2CV. It looks great and will supposedly have an interesting sounding diesel hybrid drive train.

After a couple of months and 1000 miles running my Landcruiser on biodiesel I have the following to report:

My next goal is to get my kids’ school to switch their 8 buses over to biodiesel (I’d love to hear from people who have done a similar project).

It’s taken me a while, but I have finally made my transition to biodiesel! In the last installment I talked about picking up my diesel Land Rover in Port Hueneme and then getting it ready for the road. Well, something came up while it was in the shop getting fixed up. I had originally been looking for a diesel Landcruiser as my biodiesel project car. After months of trying, I gave up and went for the Land Rover instead. Then while the Land Rover was in the shop, I found a great

Landcruiser – so now I have 2 biodiesel cars! I found the Landcruiser on eBay. It was listed by Chevrolake Motors in Canada, a car importer/exporter whose name I’d seen listed in the Landcruiser web forums as a reliable Landcruiser importer. I called them up and the car sounded promising, lots of miles (260,000!), but a straight, well maintained car with very little rust. So I headed up to Seattle to meet with Wayne Darby from Chevrolake. He picked me up at the airport and I liked the car immediately (Wayne too 🙂 ). I bought it on the spot and drove it back to San Francisco (Wayne was nice enough to let me borrow his dealer plates for the trip).

END_OF_DOCUMENT_TOKEN_TO_BE_REPLACED

I’ve gotten quite a few questions about my progress on getting my diesel Land Rover into the country and running on biodiesel. Well, some things have gone well and some haven’t :).

In my last installment I described how I had found a diesel Land Rover from an outfit called UK LandRovers in, you guessed it, the UK. They shipped the car in early July and it arrived in Port Hueneme, just south of Santa Barbara about 5 weeks later. The UK LandRovers guys sent me all the necessary paperwork and I called the port people who recommended Soo Hoo Customs Broker to get the car through customs. The Soo Hoo people were super friendly and efficient and 10 days and $400 ($200 to Soo Hoo and $200 for import taxes) later, I got a call that my car was ready for pickup. I checked with the DMV and they said to just drive it home from the port and then bring it to the DMV to get plates (sounded surprisingly relaxed for a DMV).

END_OF_DOCUMENT_TOKEN_TO_BE_REPLACED

I’ve been wanting to mention that I am angel investor in Aurora Biofuels. From their site:

They are a small, impressive team with a promising plan to use genetically modified algae to efficiently create biodiesel. Today, biodiesel is typically made from soybeans. It’s a sustainable way to create fuel, which is good, but the soybeans take 11 months to grow and the fields to grow them in are large. Aurora proposes to use algae instead, which take 10 days to grow and you can put lots of them in a small tank. I believe Aurora is interested in finding additional angel investors at this time.

After deciding to give biodiesel a try, I had to get a diesel car. It’s not the easiest task in the world to find a good diesel in San Francisco. Because of current regulations, you can’t buy a new diesel in California. So cars like the Jeep Liberty CRD, or the various new diesel Volkswagen’s are out unless you can find a used one – check diesels on Craigslist to see what’s available, they tend to run in the $15-30k range. If you want to spend less (like I did), you can find used Mercedes diesels (check Craigslist again or eBay). There are lots of well preserved 80s models in the $5-10k range. All of the above will work with biodiesel with either no or minimal conversion (replacement of fuel lines might be required on older models). Finally, there are also some diesel pickups and SUVs that show up in those listings. I dismissed those because they are on the large/inconvenient side for San Francisco.

END_OF_DOCUMENT_TOKEN_TO_BE_REPLACED

Back in February, Braughm gave me the idea to try out biodiesel. Pretty soon thereafter, I decided that I want to switch my primary car over to a renewable fuel. This has taken a little bit of research, which I’d like to share here.

Replace my primary car (a 1993 Volvo Wagon) with a car that runs on a renewable fuel. I’d like to be able to get the fuel without going way out of my way. If I’m stuck somewhere without renewable fuel, I’d like to be able to use “normal” gas or diesel as a backup. And while I’m at it, I’d like to get a smaller car that’s a little bit more convenient for around San Francisco. The cost of the fuel is not a huge factor for me (because I don’t drive that much and won’t mind paying extra if it’s better for the planet). The cost of the car is a factor, because I don’t want to invest a lot in a car that might not be the best alternative fuel choice in 2-3 years.

The requirement to be able to use widely available fuel as a backup pretty quickly narrowed my choices to ethanol or biodiesel, which can be run alongside regular gasoline or diesel respectively.

END_OF_DOCUMENT_TOKEN_TO_BE_REPLACED

Great and thorough presentation on ethanol by Vinod Khosla (found on Infectious Greed):

A couple of things I’m curious about and haven’t been able to find the answers for: